Posted on October 31, 2018 by delightfullypeculiar

The refashioners is every year the challenge, I mostly look forward to. Not only because for me is my chance to make something a little out of the ordinary but also to see all the wonderful creations of fellow sewists.  So far I have managed to participate once and my entry was only half of what I had envisioned. This year I followed a different approach, that of planning and starting early enough. Also trying not to overcomplicate my project. 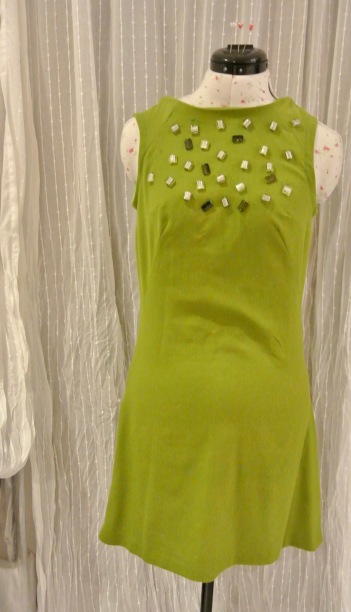 I made this Tilly and the Buttons Francoise dress some years ago when the pattern was first released and I am ashamed to admit that I never wore, except to take photos for the blogpost. I had long decided, it was going to turn into a pencil skirt as there wasn’t enough fabric for anything else. 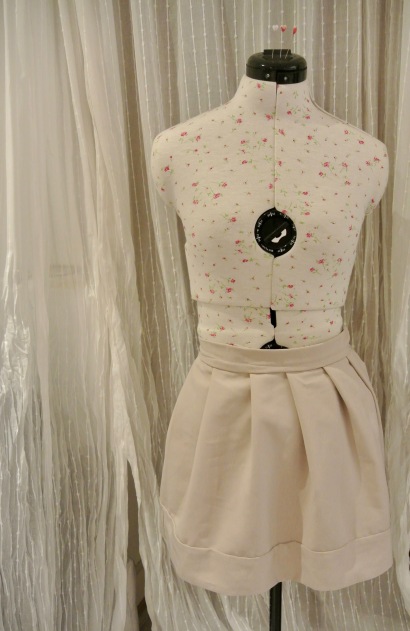 When I made the Francoise dress, I used the leftover fabric to make a colour-blocked jacket, which you can see here. I liked the combination of the two fabrics and decided to repeat the colour-blocking for a skirt this time. The second piece of my refashion was a skirt I made around the same time following the tutorial by Cotton and Curls. This skirt was more fortunate and got a lot of wear, but it always felt a bit too short, so eventually it resided mostly inside my wardrobe. 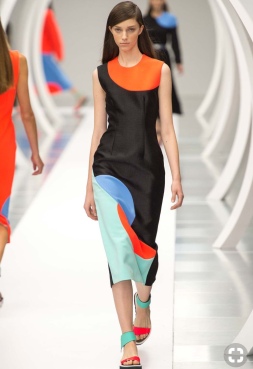 One of the things that I love the most when it comes to sewing, is creating let’s say my own fabric by colour blocking or mixing prints. I know sometimes this yields pieces that a lot of people wouldn’t wear or wouldn’t know how to, but I feel I would probably die instantly if my clothes became too boring. For this refashion, I was hugely inspired by the work of Roksanda Ilincic and Fausto Puglisi. Looking at the fabric I had to play with I decided to to go with the dress and the yin-yang type of design.

To avoid spending too much time with fitting, I used my tried and tested Lottie pencil skirt pattern, which came with an old issue of Love Sewing Magazine. I cut the pieces in stages, while laying them on the floor to see how I could actually recreate the design.

The suspicion, I didn’t have enough green fabric for the whole skirt, became a reality once the front of the skirt was lain on the floor. I’m always in denial when it comes to admitting, I don’t have endless supply of any desired fabric. At that point, I turned to my eternal inspiration Cate Blanchett who happened to be wearing this Roksanda Ilincic dress and decided the back of the skirt would be in the beige colour of the details on the front. 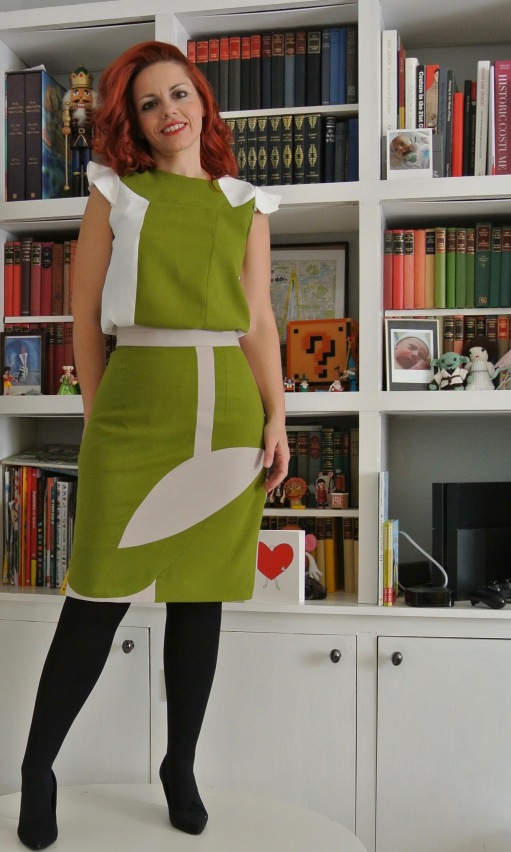 I did a back pleat vent in green, so that everything was more coherent and also a green zipper, which I actually intended to make more visible than it is, in order to replicate that design feature of the original dress.

Because I still had some leftover green fabric, I decided to go a little bit further and although I knew there wasn’t enough to make a dress, I thought maybe I could make a top. 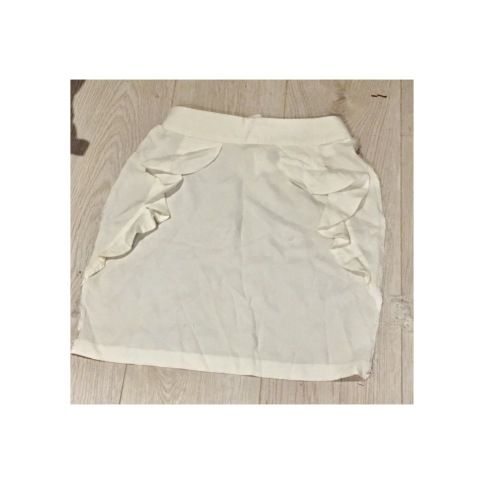 I unearthed another skirt, RTW this time, from the to be refashioned pile and used the Aimme Comme Marie Magelan pattern, which I had made a couple of times before.

On the back I used a green strip of the darts part of the Francoise dress, which created a really nice effect, if I may say so. The ruffles of the skirt became ruffled sleeves. 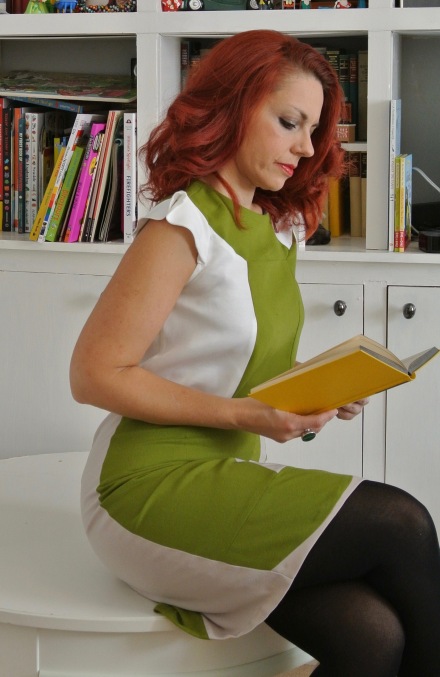 While finishing the above ensemble, I saw the below picture of the Marc Jacobs show and became slightly obsessed with this jacket. That was my chance to create something slightly crazier (because I mean the green skirt and top are quite normal haha)

Two more garments came out of the pile in my closet, this time both RTW from H&M. The skirt is completely unwarned and have no idea what possessed me to buy it. The jacket, I’d say has served it’s time but never felt very comfortable or the right size. I wasn’t sad to lose either of them. 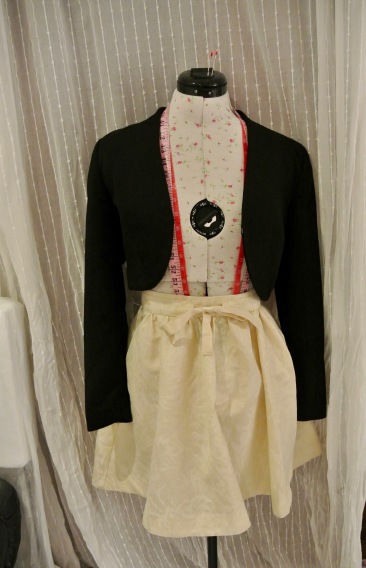 I started again with the loved and tried a couple of times pattern the Jackie-O jacket, which again was free with an issue of Love Sewing magazine. My RTW garment was quite short and narrow to fit the whole pattern pieces, so I enhanced it by adding some faux leather from my stash.

This particular process although quite time consuming, was good fun and I enjoyed the pattern puzzle I created.

The majority of the skirt was used to recreate the lapels, the cuffs and the facing inside. 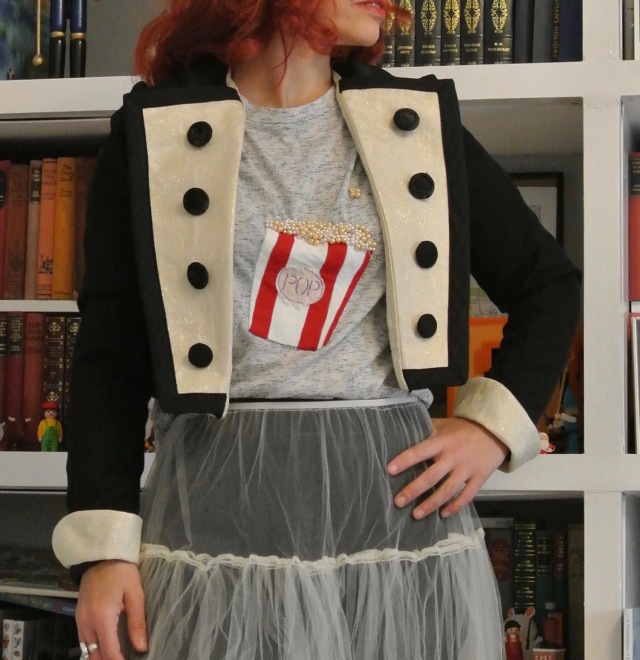 I used the sleeves of the original garment but tried to create a sort of a puff sleeve, in order to give more volume around the shoulders as per the original photo. However, I feel that it wasn’t a success. The buttons are from an old jacket and the bias tape around the lapels is the only thing I bought for this item.

The back piece is mostly from the original garment with additional fabric on the shoulders. Perhaps this is more unconventional than the first refashion and maybe a bit costumy but I think it would make a great jacket to wear at a gig or with jeans and a t-shirt, with pop-corn on preferably. 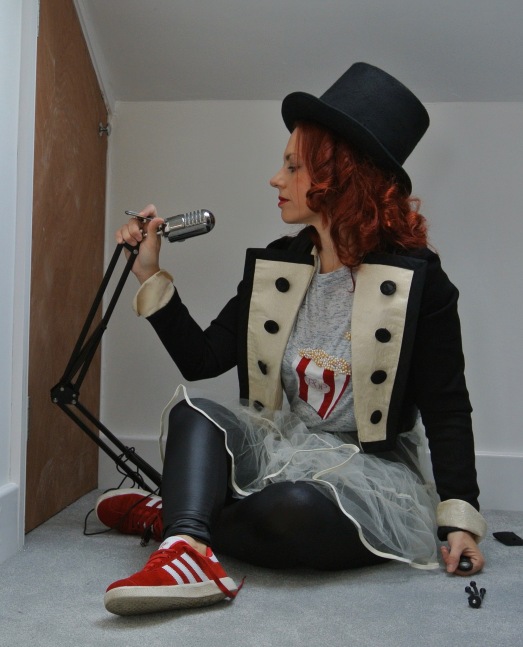 I'm Vasi, Greek living in the U.K. I wouldn't call this blog my sewing journey but an attempt to make and do the things that make me happy, sewing being one of them.
View all posts by delightfullypeculiar →
This entry was posted in sewing and tagged handmade, love sewing magazine, portia lawrie, Recycling, refashions2018, sewing, Upcycling, zero waste. Bookmark the permalink.

3 Responses to The Refashioners 2018

crafty excuses for not doing the housework