Made Up Initiative: Simplicity K1665 Trousers

Posted on September 13, 2015 by delightfullypeculiar

When Karen of Did You Make That launched the Made Up Initiative, I didn’t even think about contributing and pledging to make something. Being part of the publishing industry, it was an automatic reaction to support something that promoted literacy. Of course, I would have supported any other cause as well.

My pledge was to make a proper pair of trousers and that for me meant, woven fabric and one zipper at least. For this reason I chose Simplicity K1665, which came as a freebie with a sewing magazine. I finished it before 10th September but taking pics and blogging took a bit longer, so I missed the prize draw deadline, not that I had any hopes of winning anything haha.

For my version I used some sort of suiting fabric that I bought from the amazing fabric market in Beijing. 2 metres for a mere 1.5GBP. But more about that on a different post. I still haven’t decided whether it is blue and red or black and red.

I cut a size 12 for the waist and graded it to size 14 for the hips. It was quite straightforward to make and I didn’t think it was particularly difficult, even for someone with no experience in making this type of trousers.

I don’t know if the creasing on the front is normal but it doesn’t annoy me too much. 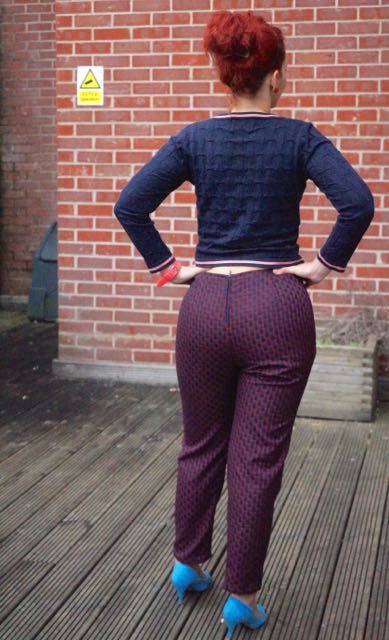 There’s a bit of sagging in the back but I think if I had made it tighter it would have been uncomfortable while sitting.

The pattern calls for a lapped zipper at the back but I went for a regular one. I think it looks ok but there’s definitely room for improvement. Apart from the zipper, there are two darts on the front and two at the back. 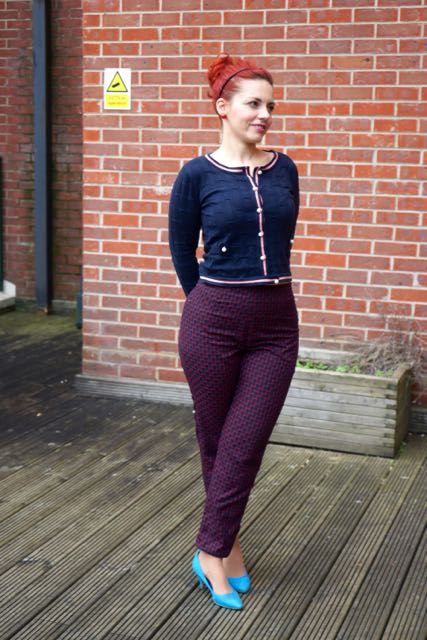 I’m not exactly crazy about the style of the trousers on my but maybe I will grow to like them, once I find the right outfit combination. I definitely enjoyed making them.

Although the goal for the Made Up Initiative has been reached and exceeded, it’s never late to give some more, if you haven’t done so already. https://www.justgiving.com/made-up

I'm Vasi, Greek living in the U.K. I wouldn't call this blog my sewing journey but an attempt to make and do the things that make me happy, sewing being one of them.
View all posts by delightfullypeculiar →
This entry was posted in sewing and tagged Beijing, handmade, made up initiative, sewing, simplicity K1665. Bookmark the permalink.

12 Responses to Made Up Initiative: Simplicity K1665 Trousers