Posted on June 8, 2012 by delightfullypeculiar

While the UK was going Jubilee crazy, I decided to fly as far away as my means would take me from this union jack and queen madness. That was as far as St. Petersburg in Russia. Travelling with my very good friend is always a guarantee for adventure and when I say adventure, I mean things going wrong. Even before we’d left the German efficiency and safety of Lufthansa disappointed us by announcing a flight delay months before the travelling date. We were certainly not starting the trip with the gods on our side.

Arriving at St. Petersburg at midnight was very promising in terms of problems. We already had in our records a similar arrival in Kiev, where not only were we ripped off by the taxi driver, we ended up nearly homeless in a place where no one spoke English. Judging from our luck (bad luck obviously) from numerous trips, we expected nothing but a repetition of the same at the Russian airport. To our surprise, the taxi we had booked waited for us at the airport and the driver seemed to know very well where our destination was. ‘God has taken pity on us,’ we thought. It was only until we reached Marata Str that our taxi driver decided he should leave us wherever it suit him but certainly not at Hotel Art House. He showed a particular preference for another one called Martin. Now the existence of ‘Art’ in Martin didn’t mean we were at the right place. After some protesting on our side, he agreed this was not our hotel and drove a little bit further outside the door of the correct one. There putting our deciphering skills in practice, we managed to find the code in the Russian note on the door and rang the right number, which granted us entrance. Greeted by a smiley Russian girl, who surprisingly spoke very good English, we were given the keys to our room. Having travelled 3 hours in the future, we were still at UK time 22:00. My friend called home to inform safe arrival and while talking on the phone, not especially loud considering how loud we normally speak (we are Greek after all) a knock on the door interrupted the telephone conversation. I opened the door to a shirtless blond Russian giant wearing just a pair of white tracksuit trousers. Immediately my mind ran to the famous Soviet Union athletes and believe me he did look the part.

Holding his ears and saying something in Russian he made it clear we didn’t let him sleep because we were too loud. ‘ Who are these little people, who dare disturb my peace?’ I translate word for word. I apologised and promised we would finish with the phone call shortly, not daring to raise my eyes all the way up to the top floor where his lived.

I had just closed the door and installed myself back on the bed when the telephone rang. I thought it was reception, so I answered. At the other end of the line the same Russian giant, I had just shut outside the room was complaining once more about the noise. Russian Flash Gordon in the flesh, not only does he run fast but also transforms into sound waves.

I explained once more, as politely as possible, (that was hard) we had just arrived and we had to let our families know, we were ok. He didn’t say a lot except repeating the word ‘sleep’ accompanied by some more of his beautiful language which I couldn’t understand and then he hang up the phone. I thought the nightmare was over, but no, he was definitely fully awake by then and was knocking on our wall, at which point I was really annoyed and made no effort to speak less loudly. Clearly, I wasn’t planning to open that door either.

After the Russian giant incident was and since it was still early in our UK time, we decided to start spending some of our money during our first white night by having a drink. 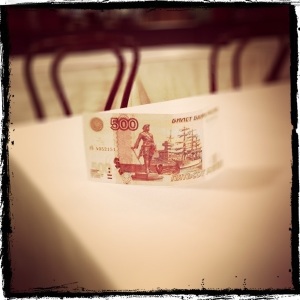 Our receptionist however, was of a different opinion. Never mind whatever money we had paid for the Visa at the Russian Embassy in London, we were not yet equipped for leaving our hotel and disappearing in the nightlife of St. Petersburg. We were in need of a registration card, on top of the fee we had to pay for the invitation the hotel sent us. Total: 1000 rubles, around £20 and we hadn’t even left the hotel. This was the beginning of a downhill road in terms of budget of which we were not aware yet. 😦

Finally, with all the necessary papers and our wallets a little bit lighter we made our way to the French Wine bar next door. 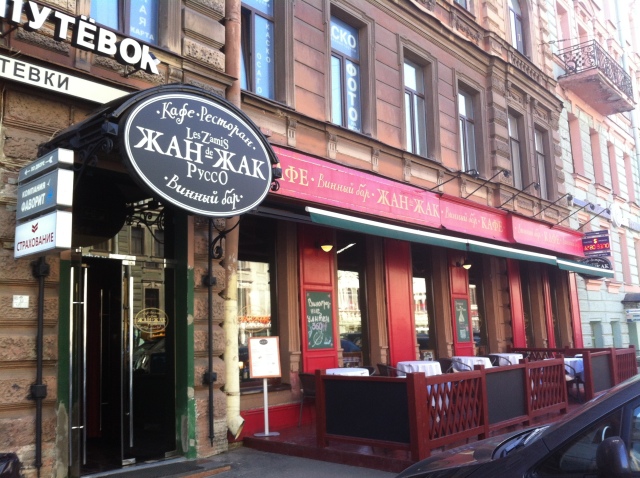 Les Z’amis was Paris in St. Petersburg, with a fully French decoration, a wide selection of wines, typical French food, including escargots and French songs from every decade playing on the speakers. On the plus side, the staff were nice, welcoming, smiley and spoke English. Hurrah! On the minus, the only customers at that time were couples, who clearly didn’t want two loud, short Greeks, spoil their Parisian dream. One of them was in a particularly romantic mood and by the end of the night we feared we were going to be served a dish, a tiny bit spicier than what we would have liked 😉  We couldn’t help but laugh and probably made them feel uncomfortable because a little bit later they made an exit, the man holding his umbrella and the lady a rose of equal size. 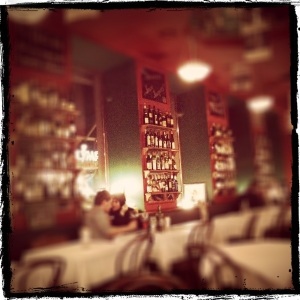 Once our early UK time had turned late, we followed the same direction out of the bar and into the hotel. The stuff at the wine bar had started clearing the tables and getting ready for closing. They were still smiley and cheerful (there’s a very good reason for the emphasis on smiling, but will explain on the following posts)

I'm Vasi, Greek living in the U.K. I wouldn't call this blog my sewing journey but an attempt to make and do the things that make me happy, sewing being one of them.
View all posts by delightfullypeculiar →
This entry was posted in Travelling and tagged airport, French Wine, Russia, Saint Petersburg, St Petersburg, taxi driver, transportation, travel, vacation. Bookmark the permalink.